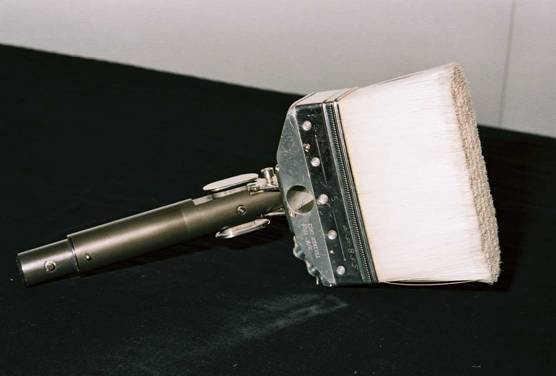 Apollo Dustbrush from
the Collection of the National Air and Space Museum.
Photo courtesy Allan Needell.

The large Apollo dustbrush was first flown on Apollo 13 and was first used on Apollo 14 in an effort to reduce the amount of dust brought into the cabin at the end of each EVA so that, on return to lunar orbit, the cabin wouldn't become quite so full of free-floating, abrasive dust.  The crews used it to remove dust from the suits when they were at the bottom of the ladder.  It was also used to removed dust from thermal covers and cooling mirrors on the Lunar Roving Vehicle.  Details of use  and lessons can be found in section 3.2.6.

The handle is roughly 20 cm long and the brush was about 15 cm wide.  The bristles are relatively coarse.  Note that the head could be set at an angle to the handle by squeezing the small plates on either side of the handle just above the head and rotating the head as desired.  A similar mechanism was available on the small, adjustable-angle scoop flown on Apollo 15 ( figures 45 and 46  in Judy Allton's Catalog of Geology Tools) and on the large, adjustable-angle scoop (Figure 47) flown on Apollos 16 and 17.  The scoop angle-adjustment was used on Apollos 15-17 but, as far as we know, none of the astronauts took the time to angle the dustbrush head.  Similarly, the dustbrush is fitted for attachment to an extension handle but, as far as we know, that feature was never used.

The need for a large dustbrush became obvious when, despite trying to  clean each other with their hands, the Apollo 12 crew brought so much loose dust into the cabin  that, when they returned to lunar orbit, the LM cabin filled with floating dust.  The dust was so bad  that Conrad and Bean had to leave their helmets on long enough for the Environmental Control System (ECS) filters to clean much  of it out of the cabin air.  After rendezvous with the Command Module, CMP Dick Gordon took one  look at them and announced that they were too dirty to come into his spacecraft and, consequently,  both Conrad and Bean stripped, left their suits in the LM, and floated over wearing only their headsets.

The following extract is taken from the Apollo 12 Lunar Surface Journal just after completion of the post-EVA-2 equipment jettison:

138:38:10 Conrad: Except for...(Stops to listen to Gibson) It's very neat and orderly except for the fact that it's very dirty.

Then, after a discussion of the EVA antenna:

138:39:35 Conrad: Yeah, I concur; the comm really has been super. (Pause) These PLSSs and suits performed magnificently. These suits are a shambles (that is, dirty) though. (Long Pause)

[Bean, from the 1969 Technical Debrief - "When we got back to the LM, we tried to dust each other off. Usually, it was just Pete trying to dust me off. I would get up on the ladder and he would try to dust me off with his hands, but we didn't have a lot of luck. We should have some sort of whisk broom on the MESA. Before we get back in (on subsequent missions), we'll dust each other up high (that is, dust off the upper parts of the suits); (and) then the LMP will get on the ladder, and the CDR will give him a dust and then will get in. We are bringing too much dust into the LM."]
["Another possibility is that, just as soon as you get in (the cabin), you slip on some sort of second coveralls that fit over the feet up to the waist, because that's the dirty area. Then you keep that on all the time you're in the LM and take it off just before you get out. The other alternative to this is that you put on a similar something (that is, a removable leg covering) when you're getting out on the lunar surface. The reason I suggest the former was that I think you want to be as free as you can possibly be when on the lunar surface. Adding another garment over the top of the already existing equipment is going to be restrictive and might give you a few more problems."]

[The large dustbrush that Al suggested for suit cleaning was first flown on Apollo 13 and, on Apollo 14 when it was first used, was a big help in reducing the amount of dust that Shepard and Mitchell brought into the cabin. Al's suggestion of leg coverings wasn't utilized until Apollo 15, the first mission on which the crew took off their suits for the rest period. After doffing their suits, Scott, Irwin, and the subsequent crews put the legs into jettison bags before stowing them on the engine cover for the night.]


Use details and crew comments can be found in Section 3.2.6.