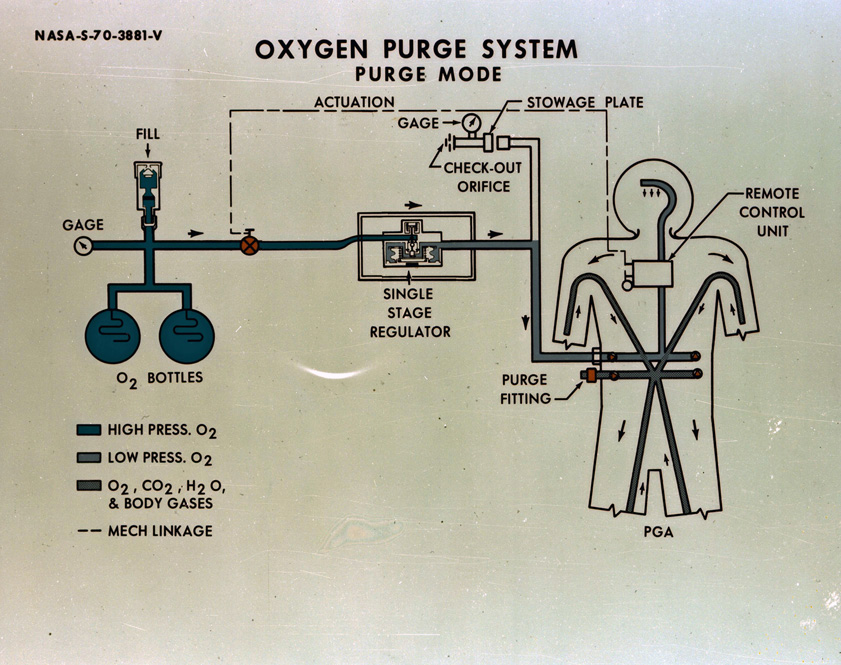 OPS Schematic
(click on the image for a larger version)

As described in greater detail in the Apollo 17 PLSS/OPS/BSLSS briefing, the OPS provides "an independent, backup life support capability.  It provides oxygen for respiration, pressure control, and cooling."  When operational, the OPS "regulates at 3.70 ± 0.30 psid  (0.255 ± 0.021 bar)".  The OPS is activated by moving a lever on the OPS cable attached to the side of the chest-mounted Remote Control Unit (RCU).

There are two OPS operational modes:


1. Purge Mode : used in the event that the PLSS can no longer provide oxygen to the suit or there is a "contaminant control" malfunction.  In the purge mode, the astronaut opens the suit purge valve in one of two settings:


a.  Low Flow:  used if cooling is avaliable from the PLSS or from the other astronaut's PLSS through use the the Buddy Secondary Life Support System (BSLSS).  As indicated in Section 4.4, "Travserse Planning Parameters" in the Apollo 17 Final Lunar Surface Procedures volume, the two oxygen bottles carried a total of 5.34 lb (2.42 kg) of useable oxygen and had a lifetime of 79.5 minutes.  The implied flow rate is 3.81 lb/hr (1.73 kg/hr) rather than the notional rate of 4 lb/hr given in the A17 briefing.

b. High Flow: used when the OPS must provide both oxygen for breathing and for cooling.  As indicated in the A17 Traverse Planning pages, the useable oxygen charge under high-flow conditions was 5.04 lb, (2.29 kg), the lifetime 39 minutes, and the implied flow rate 7.75 lb/hr (3.52 kg/hr).  The notional flow rate is 8 lb/hr.


2. Makeup Mode: used to replace oxygen lost due to excessive suit leakage or failure of the primary PLSS oxygen regulator.  In this mode, the purge valve remains closed.  The useable oxygen supply under Makeup conditions was 5.64 lb (2.56 kg).  The use rate, even under the assumed conditions of a walkback taking more than an hour would have been about 0.28 lb/hr plus any excess leak rate.  The longest walkback contemplated during Apollo would have taken no more than three hours,

None of the OPS's flown during Apollo were actually used, but a checkout was performed on each OPS before each EVA and before PLSS jettison.  The essential elements of the checkout were readouts of source pressure and of the regulated pressure.  The source pressure was reported to Houston.  The status of the heater that kept the oxygen regulator warm was also checked. The heater system was eliminated for flights after Apollo 13.   Details of the checkout procedures can be found in Sections 4.2 and 4.9 in Volume II of the Apollo 12-15 EMU Handbook and, for later flights, in Section 4.2.1 of Volume II of the Apollo 15-17 EMU Handbook.


On three occassions during the first Apollo 16 EVA, John Young's purge valve pull-pin came out when he was getting on or off the Rover, probably catching either the Red Apple or connecting lanyard on his seat belt.  Charlie Duke solved the problem for EVAs 2 and 3 by suggesting that they install the purge valve with the Red Apple just under John's camera handle, rather than at the top of his leg. According to the Apollo 16 Mission Report, a "modification has been made (for Apollo 17) to eliminate the barrel actuator spring in the purge valve and to shorten and stiffen the pin assembly lanyard.  This modification will require manual pull-out of the purge valve barrel, and will prove less chance of the red apple and lanyard being snagged."  In answer to a question during a mission review done for  the ALSJ in the early 1990s, Charlie recalled that, "the pin was just a safety, like most all pins. You pulled the pin out and then you had to make an action of turning it (meaning the purge valve) or pulling it - I've forgotten. You had to take a distinct action; but I suppose there was a possibility of brushing up against something and you could twist it or pop it and you could start flowing (oxygen) out. Your suit would make it up, but you'd be using quantity out real fast and it would shorten the EVA. So I asked John to check his EMU and make sure the purge valve wasn't popped open and he wasn't losing O2."

During Apollo 17, Jack Schmitt reported that checkout of the two OPSs consistently showed output regulator pressures close to the upper end of the range of acceptable values.  Because the readings did not change significantly across the sequence of checkouts, no action was taken.  Nor was the issue discussed in the Apollo 17 Mission Report.

Finally, in a conversation during the Apollo 17 mission review done for the ALSJ in the early 1990s, Gene Cernan said:


"At some point there had been a suggestion that we would have to stay close enough to the LM that we could get back in the case of a double failure of both the Rover and a suit.  I didn't like that and, obviously, we (the Astronaut Corps) ended up winning the argument.  There were lots of things you could do to share oxygen.  Suppose that Jack's PLSS failed and he had to go on his OPS.  The first thing I'm going to do is take my OPS off my suit and put it in his lap.  Then I wouldn't have an emergency supply but he'd have two.  I don't think that was ever written down anywhere, but if that had happened, he'd have had an hour of OPS oxygen (in high flow, two hours in low flow) and we would have been headed for home (the LM).  That's the kind of thinking that went on."


The OPS is activated by moving the Actuator lever from the OFF position to the ON position and locking it.  The OPS can be deactivated by reversing that procedure.  The lever is mounted in a bracket on the (astronaut's) right side of the chest-mounted RCU. 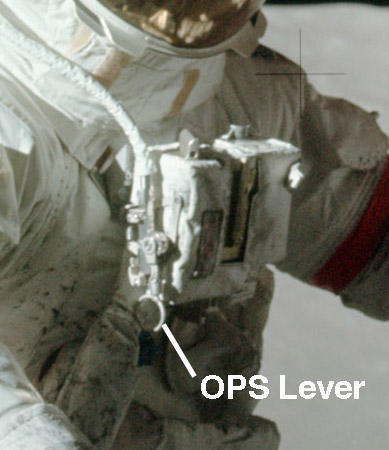 The OPS was activated by moving a lever
attached to the chest-mounted Remote Control Unit (RCU).
The lever had a ring on the end, making grasping it easier.
Detail from Apollo 17 photo AS17-134-20385 of Gene Cernan. 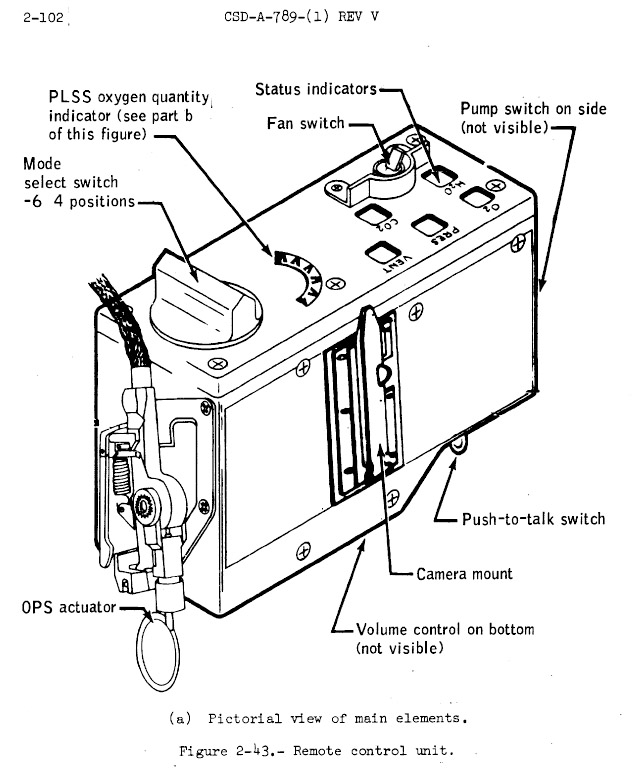 Diagram from the Apollo 15-17 EMU Handbook (vol. I)
showing the OPS actuator. 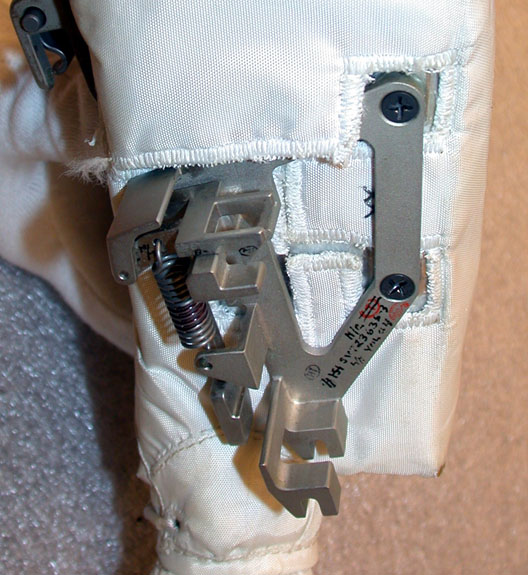 OPS Actuator Bracket on the side of a training unit, photographed in October 2006 at the Smithsonian Institution's Garber Facility by Ulrich Lotzmann and Amanda Young. (Click on the image for a larger version) 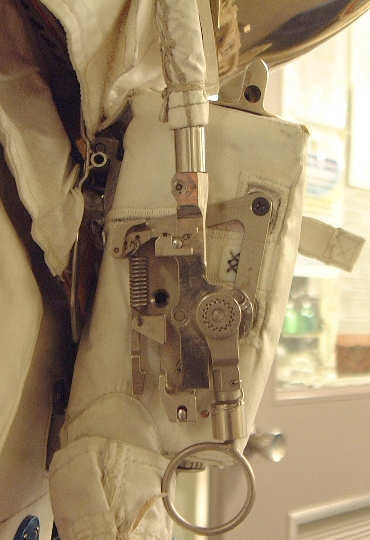 Side view of an installed OPS Actuator.
Photo by Paul Kashuk. 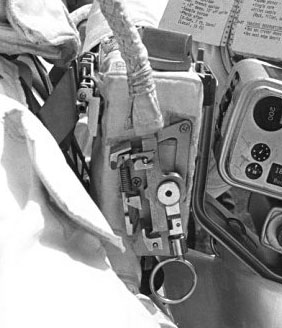 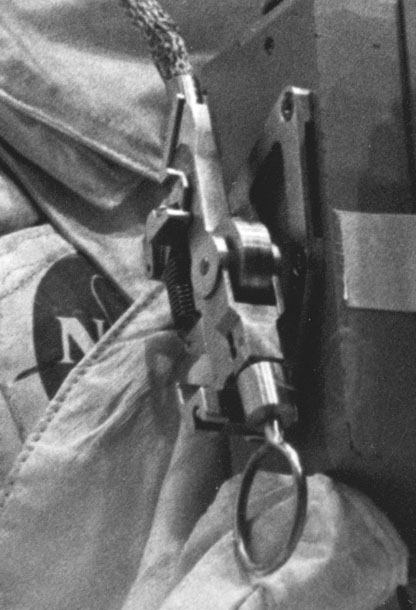 
Section 2.2.5.10 in the Apollo 14 EMU Handbook, Vol. 1 - "The purge valve (fig. 1-29, below) is inserted in the red, unused outlet gas connector during EVA. The purge valve has two positions, low flow and high flow, which may be changed during a purge if conditions require it. The low flow position flows 4.0 ± 0.2 ib/hr of O2 at 4.0 psia PGA (Pressure Garment Assembly)  pressure during the purge operation. This provides adequate CO2 washout when additional cooling is not required. The high flow position flows 8.1 ± 0.3 lb/hr of O2 at 4.0 psia PGA pressure during the purge operation if CO2 washout and additional metabolic cooling is required. To change positions, the small button on the face of the valve is depressed and the knurled portion of the valve is rotated to the position desired. The valve is activated by removing the additional locking pin and depressing the two activation tabs. The order of the two steps is not critical. To shut off purge flow, the valve can be removed from the gas connector or the center barrel can be depressed and the locking pin reinserted." 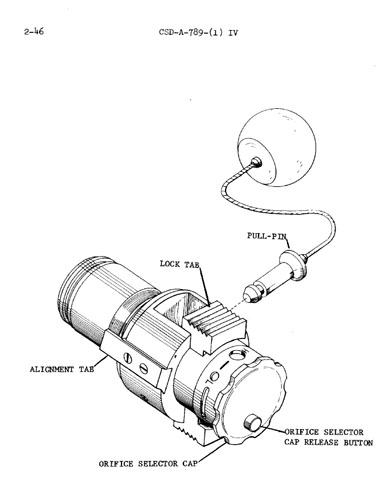 Figure I-29 from the Apollo 14 EMU Handbook, Vol. 1.
The round ball at the upper right, which was used to remove the pull-pin,
was colored bright red and was called the 'Red Apple'.
(Click on the image for a larger version)

Lunar photographs of Buzz Aldrin's purge valve (left) and Al Bean's (center).
The image on the right shows a purge valve installed on John Young's training suit.
(Click on the image for a larger version)