Velcro was used in many contexts during Apollo.  In both the Command and Lunar Modules, it was used to secure checklists and miscellaneous small piece of equipment to instrument panels or bulkheads for easy viewing or access.  On the lunar surface, it was used to keep suit pockets closed or open, to secure Sample Collection Bags (SCBs) and other gear to the PLSS tool harness, to secure antenna leads on the Rover or for such spurposes as hanging the Cosmic Ray Experiment from a convenient landing gear strut, securing dust covers on the Rover, and securing wristwatches, small mirrors, and cuff checklists to the suit sleeves.

2.1  Generally speaking, Velcro was used successfully -  provided that a particular Velcro patch did not become dust clogged, that the adhesive used to attach the patch to a particular surface was properly chosen and applied, and that the patches of Velcro hooks and pile were properly aligned and mated. On occasion, the astronauts had trouble separating Velcro pieces, complaining that "too much" Velcro had been used in particular applications.

2.2  Dust could be a problem for Velcro when used

(b) on the floor of the LM cabin where dust collected after being brought in on the suits; and

(c) on the Rover when failure of a fender allowed wheel-generated roster tails to shower the Rover with dust.  A strap sewn to the bottom of the PLSS and used to secure SCBs on the Rover missions was particuarly prone to dust clogging.

2.3  There was two notable instance of adhesive failure and three minor ones:

(a)  A thermal bag designed to protect the Surface Electrical Properties receiver was mounted behind the LMP's seat on Apollo 17.  Cover flaps were intended to protect the radiating surface on the top from dust during drives from one geology stop to the next.  The adhesive used to attach Velcro patches to the body of the thermal bag failed and, as a consequence, the astronauts were unable to keep the radiator clean enough to prevent the receiver from overheating.  Because the receiver was regularly hotter than its design limit, little useful data was collected;

(b) The half-full SCB on John's PLSS tool harness came off during the drive from Station 9 to Station 10.  Fortuantely, it wedged between the rear fender and the Rover frame, where he found it after dismounting at Station 10.  The bag had been secured with a Velcro strap with one end sewn to the bottom of the PLSS.  The free end was then passed thru a fabric loop on the bag and secured to the bottom of the PLSS with Velcro.  A better solution might have used a strap sewn onto each SCB, a loop on the PLSS, and a Velcro and/or snap fastening on the SCB;

(d)  Adhesive holding two of three Velcro patches designed to hold a traverse map on the handle assembly of the Apollo 15 Modular Equipment Transporter (MET or "rickshaw") failed; and one of the astronauts had to carry the map. This was not a significant problem in the context of Apollo 14.

(e) Adhesive holding Velcro patches that secured straps to special padded sample bags used on Apollo 16 failed.  The straps would have provided extra security for keeping the bags closed, but the inability to used the straps has no particular consequences.

2.4  During Apollo 15 EVA-2, Dave Scott had difficulty using his drink bag, probably because of improper positioning.

2.5  During the Apollo 11 Technical Debriefing ( Section 18.6.2 ), Mike Collins noted that he suffered eye irritation from broken pieces of Velcro hooks that floated around the cabin in zero gravity.  Because no mention of such a problem appears in the later Mission Reports, a change in materials and or manufacturing may have been made to reduce or eliminate the problem.


The Apollo 15, 16, and 17 crews had snack pouches and drink bags secured inside the suit neck ring to get them through the eight-hour EVAs.  Some of the astronauts had small patches of Velcro on the inside of the emergency feedport for nose scratching


6. Velcro use in the Command Module 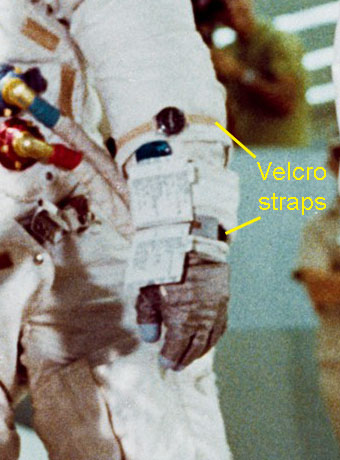 
Velcro straps of various lengths were used to secure watches, cuff checklist, and small mirrors to the suit sleeves, to secure antenna leads on the Rovers, etc. 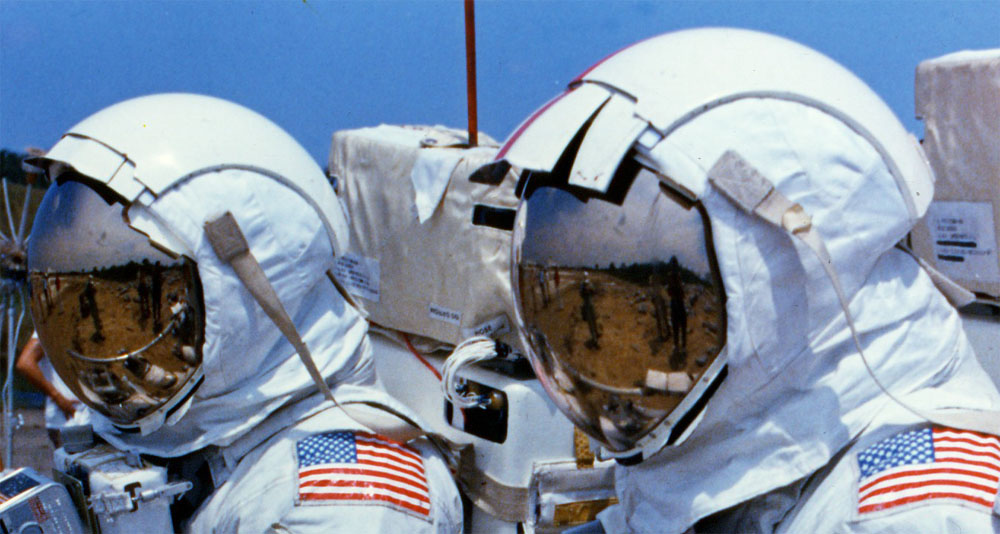 Detail from Apollo 17 training photo 72-HC-699 shows A tool harness strap secured to the left side of both Jack's and Gene's LEVAs. An identical strap is attached on the right side of each LEVA. At the back of each LEVA, we have a glimpse of Velcro closures over  the astronaut's neck. There are similar closures at the front, as can be seen in a close-up photo of Jack's flown LEVA.

On all the missions, after donning the bubble helmets, the astronauts donned the LEVAs and made sure the front and back closures were tidy and secure.  On the Rover missions, the astronauts also Velcroed harness straps to the LEVAs.  Once outside, they sometimes did more tidying.  Making sure the patches of Velcro pile and hooks were accurately mated helped keep them clean. 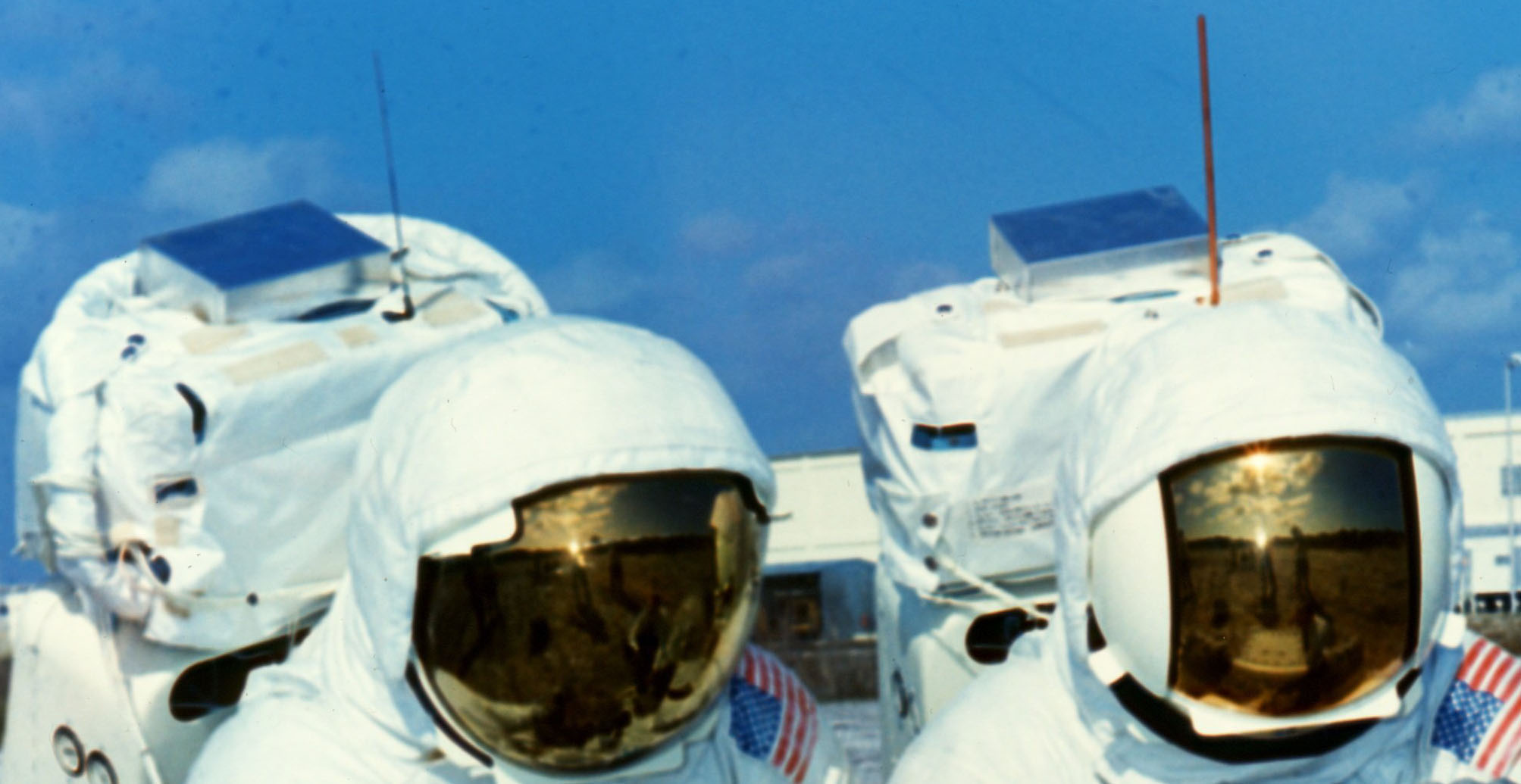 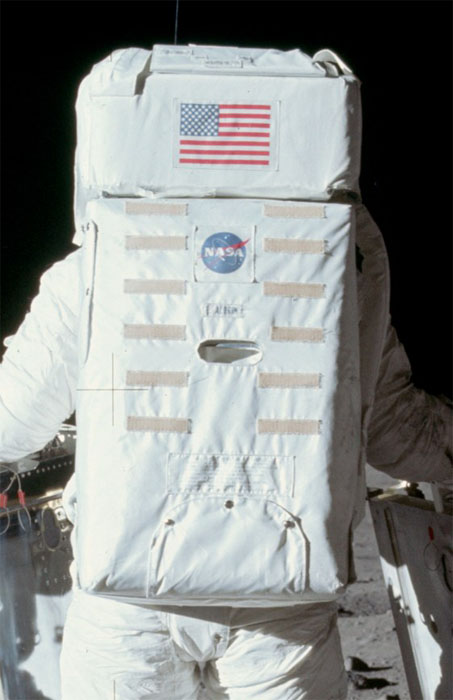 Each of the PLSS had two columns of horizontal Velcro strips on the back.  Ken Thomas, a member of Hamilton Sundstrand's Space Hardware Heritage Team and author of U.S. Spacesuits (2006, Springer-Praxis), writes "The white cover - or Thermal Meteoroid Garment -  on the PLSS was designed and fabricated by Hamilton Standard (now Hamilton Sundstrand), Windsor Locks, CT.  In zero gravity, if an astronaut wished to look out the Lunar Module windows, he would have difficulty keeping position.  Where his feet would be was the rack where the CDR PLSS and both OPSs were stored. In zero-G simulations, someone damaged an antennae on an OPS mounted in the rack of the simulator." 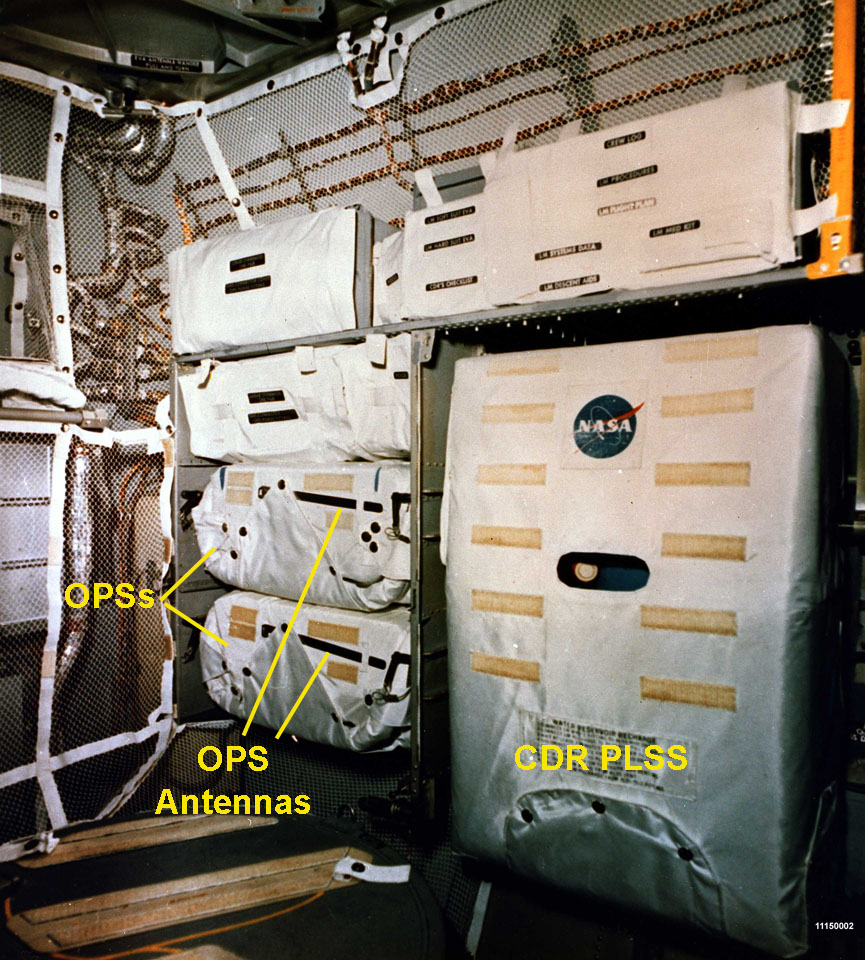 "Because the astronauts were already wearing booties with Velcro hook on the bottoms, patches of Velcro pile could be placed on the back of the CDR PLSS and the tops of the OPSs to provide a crew member with places to anchor his feet so he would not floating around and potentially damaging things while he was doing visual positioning or recreational star gazing.  Once the Velcro was there, additional uses for sample bags and tool pouches were found as the missions evolved."  The LMP's PLSS was stowed on the cabin floor next to the hatch.  These also had Velcro strips, perhaps in the interest of interchangability. 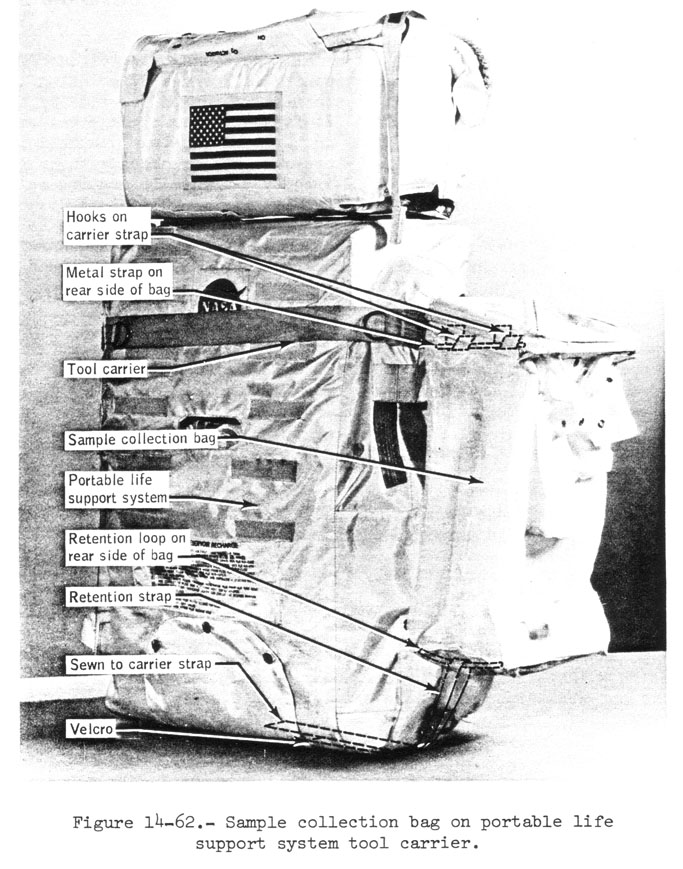 The astronauts used sewn-on and/or strap on leg pockets in various combination.  Most of the  cover flaps were held open or closed with Velcro. 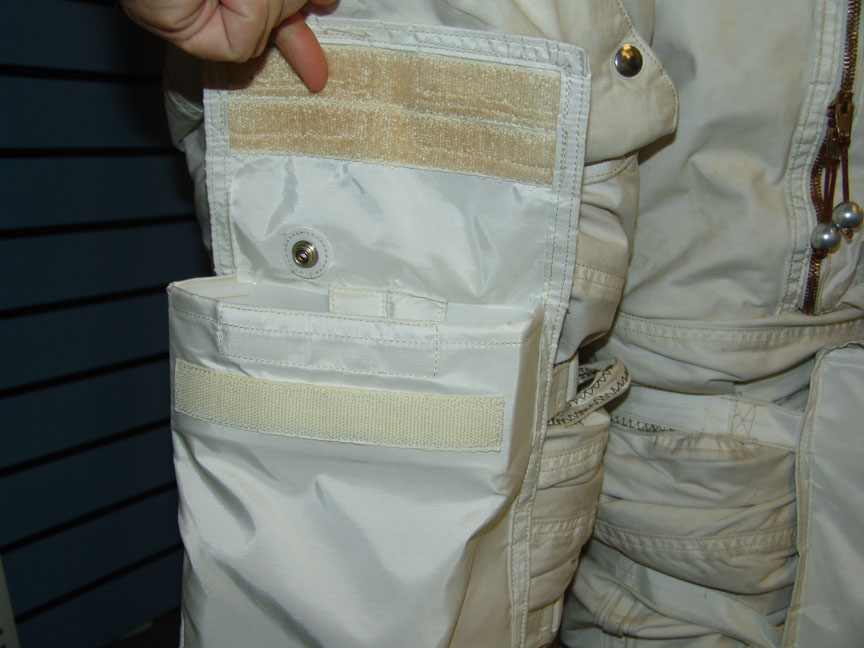 Strap-on shin pocket displayed on Charlie Duke's training suit.
The open flap reveals the Velcro that would keep it closed. 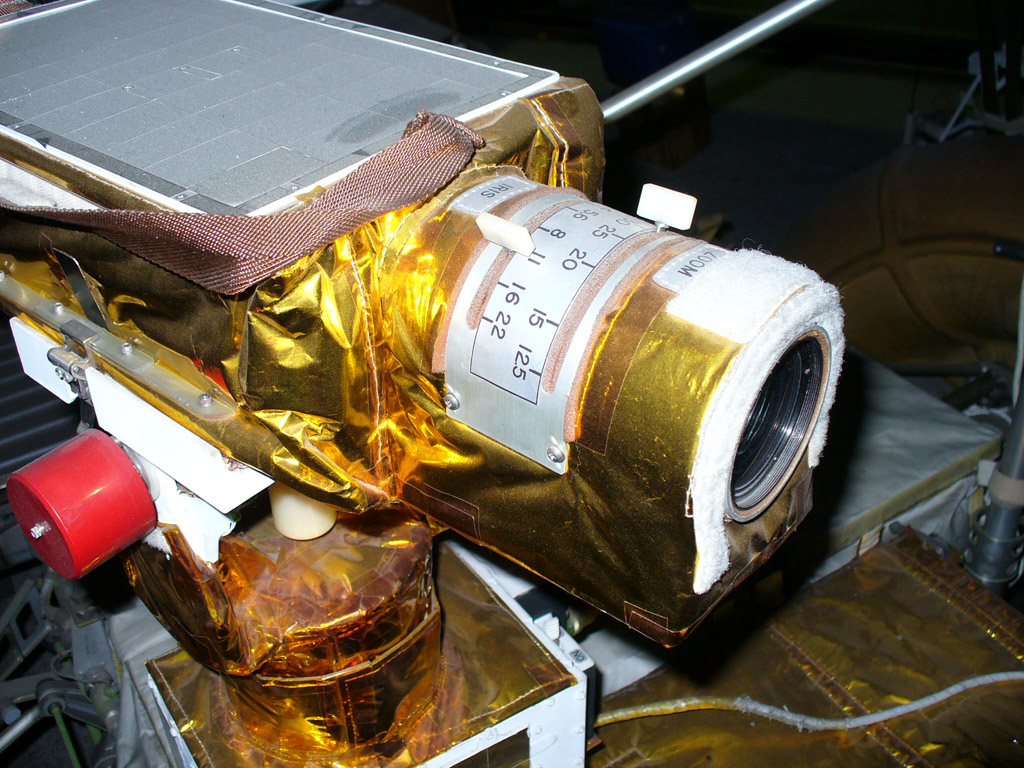 This image shows the TV mounted on the LRV Qualification Unit that is on public display at the Smithsonian Institution's National Air and Space Museum.  It shows a Velcro patch on the top of the lens barrel and an additional Velcro around the lens that were use to secure the TV sunshield/sunshade that was first flown on Apollo 16.  See, also, a larger version of this photo, an alternate view from above the camera, and a detail from AS16-106-17381, which shows the sunshield as installed.  A detail from AS16-117-18752 shows a short strap fixed to the top of the sunshield which undoubtedly mated with the Velcro on top of the TV lens barrel.  Qual Unit photos courtesy Allan Needell.  A second Qual Unit is on public display at Space Center Houston.  It has a sunshield installed, as shown in a detail from a photo by Mike Gentry.

Shuttle astronaut Thomas D. Jones, author of Skywalking and a veteran of four Shuttle flights including three EVAs to install the ISS Destiny module, provided the following comments about his experiences with Velcro:


"Velcro in free fall is very effective. Nearly every loose object we use has a Velcro tab or dot on it so we can stick it to a panel or wall. Locker fronts and flight deck panels have patches of Velcro pile to accept the hook-type dots on pencils, notebooks, etc."

"We secured cables using those Velcro strip tie-downs that you wrap back on themselves. They are so good at wrapping things up that you can tear your fingers trying to get the strips apart again. I took to wearing thin leather gloves during any kind of unpacking or stowage work so I didn't get my hands torn up by all the hook Velcro we would inevitably encounter on stowage bags, cables, and surfaces."

"The orbiter crew cabin has safety (fire) standards saying how closely one may place Velcro patches...to avoid putting too much flammable stuff on cabin surfaces."

"On EVA, we don't use Velcro much. It degrades in the atomic oxygen environment, and gets brittle and crumbly. I believe we only use it to hold fabric pieces of the suit in place...glove gauntlets, the crew patch and flag on the suit, and to close the little cover over the umbilical receptacles on the chest pack (DCU). That Velcro is only exposed for a few hours outside on any mission. On the ISS, some fabric thermal covers are held down to the hull by Velcro, but the patches are not exposed to the raw environment...they are on the underside of any covers. To hold everything else, we use tethers or copper wire ties."

"One last example: the orbiter hatch thermal cover is held closed over the metal hatch by Velcro around its circumference. When I first opened the hatch on EVA 1, I had a very tough time opening that thermal cover, held closed by several linear feet of tightly engaged Velcro. I finally had to use a fist to punch one small strip open, then karate chop my way around the rim of the cover to force the Velcro apart. I worked so hard at it that my visor began to fog. Velcro is tough stuff."


With reference to Jack Schmitt's negative review of the Teflon Velcro used during Apollo, Tom Jones's comment that safety considerations dictate a minimum spacing between Velcro patches in the Shuttle suggests that Teflon Velcro is not used in the Shuttle.