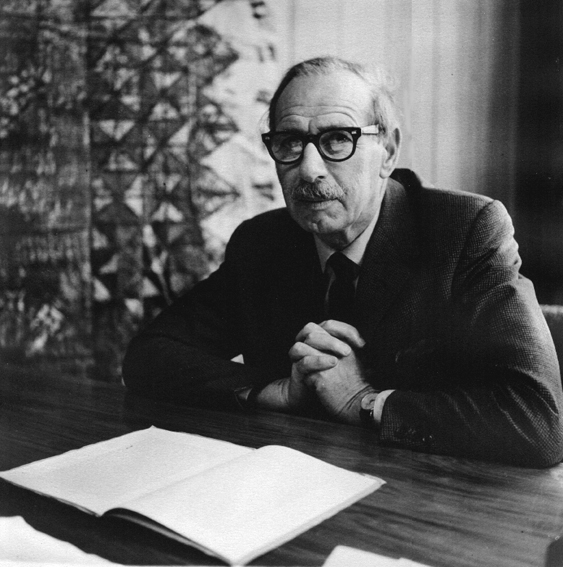 (Adapted from a biographical sketch by
Steven Wong and Margaret Ferguson)

John Beaglehole was born in Wellington (New Zealand) in 1901 and graduated in history from Victoria University College (as the University then was) in 1924. He took a Ph.D. at the London School of Economics, and returned to New Zealand in 1930, to temporary lecturing positions for the Workers' Educational Association and at Auckland University College (now the University of Auckland). He was appointed lecturer in history at Victoria in 1936, then senior research fellow in colonial history in 1948 and Professor in 1963. He retired in 1966.

John Beaglehole's principal scholarly achievement, for which he was awarded the Order of Merit, was his work on Captain James Cook and the exploration of the Pacific. His interest in Cook was aroused by work for his book The Exploration of the Pacific, first published in 1934. He proposed at that time to prepare an edition of Cook's Journals as the necessary prologue to a life; in 1948 he was commissioned by the Hakluyt Society to edit the journals and the New Zealand government provided a grant to enable him to devote his chief energies to this work over the next seventeen years. In 1967, after publishing the two volumes of the third voyage, he was able to turn his attention to a biography of Cook. The revision of this was incomplete at the time of his death, but the work was published in 1974. The consensus of reviews and subsequent scholarship has been that the editorial matter in the Journals and the Life amount to a definitive account of Captain Cook.

Although most of Beaglehole's scholarly career was devoted to Cook and the allied topic of Pacific exploration it was not his sole concern. His M.A. thesis on Captain Hobson and the New Zealand Company, and his Ph.D. on British colonial policy, led to an interest in New Zealand constitutional history and Commonwealth relations. This interest was transmitted to many students and was expressed in general and scholarly articles. His career as a teacher led to popular articles on topics of historical relevance, and to addresses on historiography and historical research, the best known of which is his 1954 address The New Zealand Scholar.

His concern for the conditions of historical research showed in his early participation in campaigns for the proper care of archives and in support of good libraries. In 1938 he was appointed historical advisor to the Department of Internal Affairs, and in this capacity he was closely involved in the planning and publication of the Centennial surveys, the series marking 100 years of British sovereignty in New Zealand. He was particularly responsible for the typographical design of these books, which have been credited with making good design known to the New Zealand public at large. This was part of an extensive and active concern for the arts in general, from his student days as a contributor to and editor of student journalism, his active involvement in the Chamber Music Society, membership of the National Art Gallery trustees, and foundation membership of the Historic Places Trust.

Within the University, he was responsible for much of the impetus behind the establishment of the University's art collection, as well as being active in university committees, and writing its informal history for the Golden Jubilee in 1949. From his student days he preserved an active involvement in what were termed, in the 1930s, 'advanced ideas'. On his return from London to years of temporary jobs he involved himself in such public defence of civil rights as then existed, losing his temporary position at Auckland University College for his defence of free speech. In 1951 he was one of many who objected to the suppression of debate on the Waterfront strike of that year, and in 1952 he became the foundation president of the Council for Civil Liberties. His commitment to the ideals of scholarship, to the steadfast pursuit of truth, and to freedom of speech and thought, was long-standing and notable. His concern for the arts, for high standards of cultural achievement and involvement was equally notable. In 1970, at the time of his investiture with the Order of Merit, the University Council wished to give permanent recognition to the honour accorded the University by its association with John Beaglehole. It was felt the establishment of proper facilities for the use of the University Library's research collections would be a particularly suitable tribute. In 1974 the J.C. Beaglehole Room was opened in the Library to give effect to that resolution.