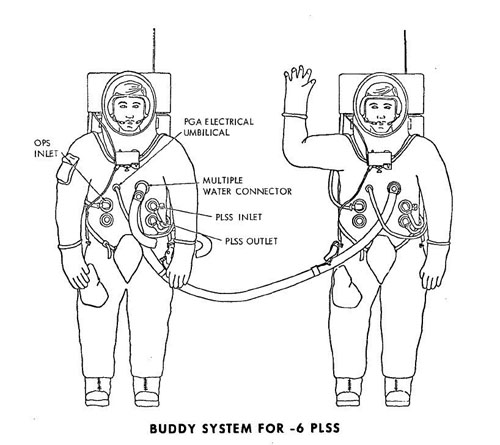 
The BSLSS (described below) was a set of hoses and connectors that allowed a crew to share cooling water in the event that one of the PLSSs failed.  By sharing cooling water with his partner, the astronaut with the failed PLSS could operate his Oxygen Purge System in low-flow and get about twice the useful life available in the high-flow mode.  The OPS/BSLSS combination gave the two astronauts about 75 minutes to reach safety of the LM cabin.

A BSLSS was first flown on Apollo 14.  Interestingly, with the exception of Charlie Duke, none of the Apollo 14 - 17 astronauts who participated in ALSJ mission reviews remembered that the BSLSS was designed to share cooling water, rather than oxygen.


Jack Schmitt, from a conversation during the Apollo 17 ALSJ mission review: "It rings a very faint bell that we had something called a Buddy SLSS; and the fact that neither of us remembers much about it shows how much we felt we'd need it!"


Another reason was undoubtedly that fact that the BSLSS donning and doffing procedures were simple.  When asked during the Apollo 16 ALSJ mission review if he and John had done much training on "disconnects and reconnects in the field", Charlie answered:


"Not a lot.  But we'd done it enough.  It was a simple procedure.  We could have done that with no
problem."


And, in response to a December 2008 question about any training he and Al Shepard might have done for an emergency return to the LM using the BSLSS, Ed Mitchell wrote:


"Frankly, we never trained on that emergency at all.  We knew we had it (meaning the BSLSS) and looked at the equipment, but that was the extent of it."

The Apollo 11 and 12 crews stayed close to the LM.  During the Apollo 11 EVA, neither crewmember went more than 60 meters from the LM.  On Apollo 12, the crew was prepared to travel as much as a kilometer from the LM to reach the Surveyor III spacecraft had they landed off target.  In the event of a sudden and complete failure of one of the PLSSs, the Oxygen Purge System (OPS) mounted on top of the failed PLSS could provide  both CO2 purging and cooling for about 39 minutes in the high-flow mode. The Apollo 12 site is relatively level and the crew would have been able to run back at a speed of roughly 3 km/hr.  Depending on how far they were from the LM, they would have been back in 20 minutes or less, giving them at least 19 minutes - and an unused OPS - for getting back in the cabin.  (At the time Section 4.4 of Apollo 17 Final Lunar Surface Procedures was written, 13 minutes were allocated for Emergency LM Ingress.)

Similarly, the Apollo 13 crew planned to land at Fra Mauro, at the same location where Apollo 14 later landed.  During the second EVA, they intended to make a traverse to the rim of Cone Crater, a trip that would take them about 1250 meters from the LM.  Because of the need to make their way around craters along the route, a more realistic travel distance was about 1400 meters.  At 3 km/hr, at the end of a 1.4-km, 28-minute trip back to the LM, they would have had roughly 11 minutes of time remaining on one of the OPSs and could use the second OPS for ingress.

In the weeks before Apollo 12, NASA began to take a closer look at the needs of the Apollo 16-20 crews, who would have the Lunar Roving vehicle and would make drives of up to 8 kilometers.  In the event that one of the two PLSSs failed completely, the crew could be faced with a drive of up to an hour back to the LM. Use of the two OPSs succesively in high-flow would get them back to the  LM with only about 18 minutes remaining on the second OPS.  In principle, that would have allowed an Emergency LM Ingress, but with an uncomfortably thin margin.

At a 10 October 1969 meeting of the Manned Space Flight Management Council, "Major Milestones were reached for extending astronauts' staytime on the moon and increasing their mobility for the Apollo 16 - 20 missions.  Modification of the A7L spacesuit incorporating improved waist mobility were authorized, and letter contract authority for the portable life support system/secondary life support system was approved."

Increased waist mobility would allow the astronauts to sit on the Rover and would improve running speed.  Increased capacity of the PLSSs would allow 8-hour EVA.  We have not been able to locate details of an advanced Secondary Life Support System (SSSS) that was under consideration.  However, in a 3 November 1969 letter to James McDivitt, then Manager of the Apollo Spacecraft Program, "Christopher C. Kraft, Jr., MSC Director of Flight Operations, suggested that an in-house review re-evaluate the Apollo secondary life support system, because of its complexity and cost of development, and, at the same time re-examine the possibilities of an expanded oxygen purge system using identical concepts."  The Buddy Secondary Life Supoort System was an effective, relatively inexpensive result of the re-evaluation.


From a conversation with Dave Scott during the mission review conducted for the ALSJ during 1992-3:


Scott - "Well, I think (the BSLSS was) probably an evolution from the SCUBA (Self-Contained Underwater Breathing Apparatus) work we did. As you probably know, everybody was trained in scuba. We went to the Navy's Underwater Demolition School and got all that training, with two tanks, not one tank. So we stayed down a long time, which was a lot of fun. Another nice element of what we were taught."

"In SCUBA, you are trained that, if you lose your mouthpiece or oxygen, you breath on your buddy's oxygen. So I would say, off the top of my head, that when we get into on-the-Moon exercises, you think about the buddy system and you think about breathing underwater, and you think, 'Gee, if my oxygen goes out, I'll tap into my buddy's oxygen. Because that's already demonstrated and that works out very well. That may have been the evolution. I thought it was obviously a good idea. Before we were assigned the Rover, we had the longer duration, seven-hour PLSS, so we were going to be able to go much further than 14 (who had a four-hour PLSS capability, with margins), even if we only had a MET, which would mean that the buddy system would be even more important. And we practiced it, and I think it was a great idea."

The fact that, twenty years after Apollo, Dave mistakenly thought the BLSS was used to share oxygen, rather than cooling water, is irrelevant.  The principle is the same. 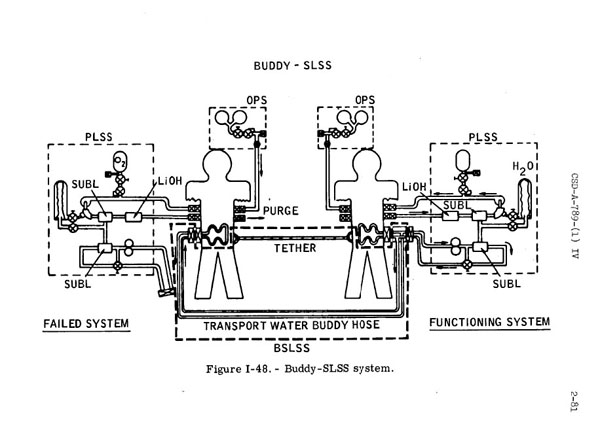 
2.9.2 Buddy Secondary Life Support System The BSLSS enables two EVA crewmen to share the water cooling provided by one of their PLSS's following loss of this capability in the other PLSS. The system (fig. 1-48) is made up of six principal components:
a. Two water hoses 8-1/2 feet long and 3/8 inch inside diameter, to carry the coolant flow between the good PLSS and the other crewman; b. A normal PLSS water connector on one end of this double hose; c. A flow-dividing connector on the other end of this double hose consisting of an ordinary PLSS water connector coupled with a receptacle to accept a PLSS water connector; d. A 4-1/2-foot restraint tether with hooks for attachment to the PGA LM restraint loops; e. A thermal sheath the length of the hoses with tether breakouts 2 feet from each end; f. A thermal pouch for stowage of the assembly on the PLSS during EVA and in the LM cabin during non-EVA periods. 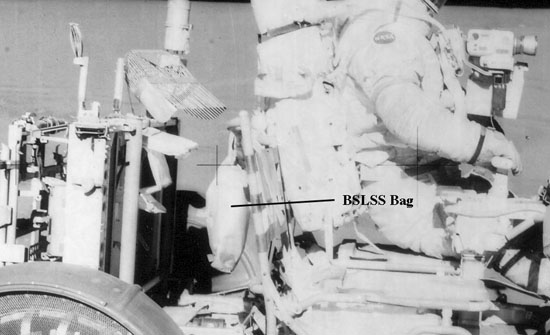 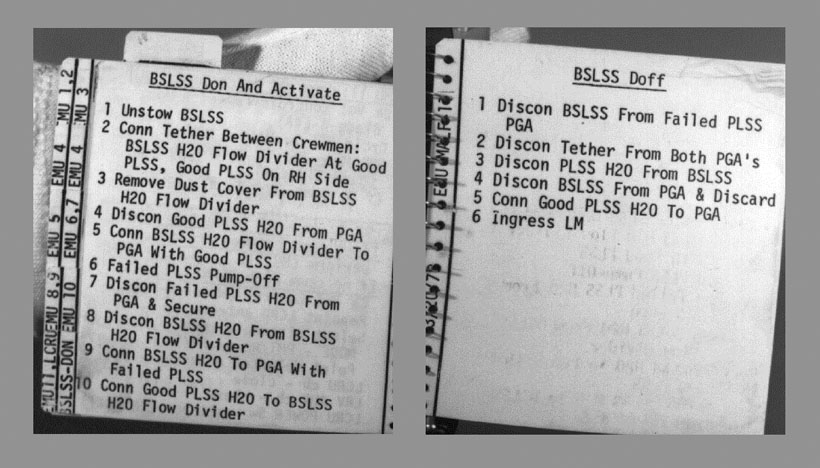 
The procedures given in the Apollo 14, 15, and 17 cuff checklists are nearly identical to these, differing only in that  the words "Good PLSS on RH side" in Item 2 on the first of the two pages does not appear in the Apollo 14 version.  Clearly, use of the BSLSS required that the astronaut with the good PLSS be on his buddy's right.