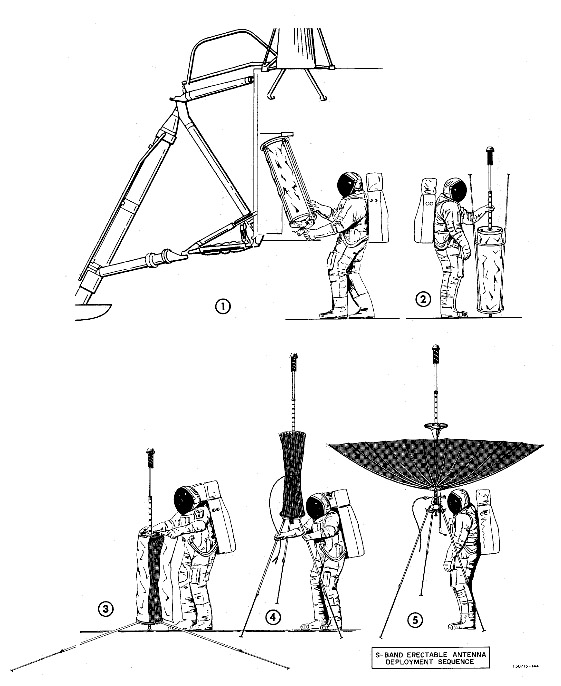 The antenna package, including a thermal/micrometeoroid cover
an end cap and various fastenings, had a terrestial weight of 6.1 kg.
When deployed, the umbrella diameter was 3 m. The tripod height
and base width were both 1.5 meters. Illustrations from pages  2-20 to 2-22
in Lunar Module Structures Handout, LM-5

The Erectable S-Band Antenna was first flown on Apollo 11 and was intended to provide a stronger television signal.  Because time during the brief Apollo 11 EVA was so precious, the expected 19-minute deployment of the antenna would have a major impact of productivity.  Consequently, an assessment was made of the first few minutes of the B&W TV signal coming through the LM's steerable antenna.  The signal was deemed adequate, so the Erectable S-Band wasn't deployed.  It was deployed on both Apollo 12 and 14.

Deployment was intended to be easy enough that one person could do it.  However,  training convinced the Apollo 12 crew that they might have to work together when aiming the antenna at Earth.  On both the Apollo 12 and 14 deployments, the astronauts worked as a team doing rough alignments and then, with one of them watching the sighting glass and making small adjustment to elevation using the flexible-cable crank, the other astronaut held the antenna to keep it relatively steady and to keep it from tipping over.  The Apollo 12 and 14 deployments took 15 1/4 and 10 1/2 minutes, respectively.  In both instances, the second crewman took part for about 5 minutes.

Detailed procedures can be found on pages 35 to 39 in the Final Apollo 12 Lunar Surface Operations Plan ( 6 Mb ).

The low weight and high center-of-mass meant that the antenna was easy to disturb.  Evidently, there was enough friction ("stiffness")  in the crank mechanism to cause the structure to move or, even, tip over, unless the astronauts worked together to keep it steady while it was being aligned.  This is probably a case in which mechanical forces became more important relative to gravity than had been the case on Earth.

The Apollo 14 deployment took about 10 minutes 30 seconds versus 15 minutes 15 seconds for Apollo 12.  The difference was due entirely to a much quicker alignment, undoubtedly due to lessons learned for the Apollo 12 experience.

As indicated, the following two-line decal was in the equipment bay to the right of the ladder, just below the stowed antenna.  See Apollo 11 training photo S69-31055. 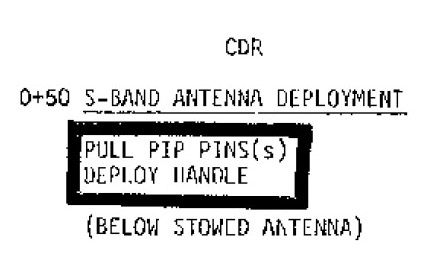 The handle is at the bottom of the package in the following figure, in the astronaut's right hand.  The astronaut's left hand is on the carry bar.  Click on the image for a larger version.  See, also, a detail from S69-31056.

The following decal was on the top plate (end cap) of the package as can be seen in a detail from Pickerell photo 01.  The plan was to have the deployment in the field-of-view of the 16mm sequence (movie) camera mounted in the LMP's window.  'Gross pointing' may have involved holding the package upright and turning it around its vertical axis until an arrow on the top plate was pointed at Earth's azimuth (training photo S69-31057).  The antenna was supported on three telescoping legs, which were to be unlocked at this point (Pickerell photo 02).  Finally, the top plate and underlying pad were removed (S69-31150) and discarded (S69-31151). 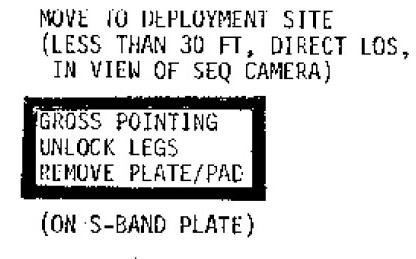 As indicated, the next decal was under the top plate.  The antenna's transmitter-receiver was located at the top of a two-section, telescoping mast which, when extended (Pickerell photo 04) and locked, put the transmitter-receiver at the focus of the umbrella-shaped, wire-mesh dish.  Once a second azimuthal alignment was done, the three, telescoping legs were extended upward (training photo S69-31058).  Then, once a tie-down strap was removed from each leg, they were allowed to rotate down, lying horizontal on the ground but attached at pivot points at the bottom of the main antenna body.  At this point, a thermal/micrometeoroid cover (Pickerell photo 05) was removed from from around the bundled umbrella ribs and wire mesh.  Finally, the antenna body was lifted vertically (Pickerell photos 06 and 07, and S69-31156) to get the legs into position and locked.  (During the Apollo 14 deployment, Alan Shepard removed the thermal cover after the lifted the antenna and got the legs locked.) 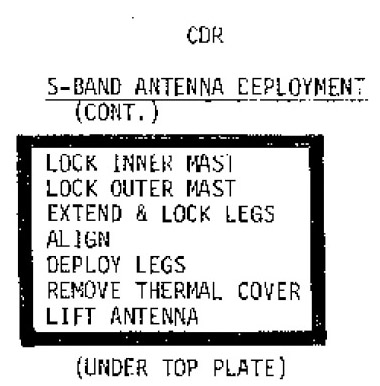 The final deployment decal was on one of the legs.  The first steps are to remove the carry bar and a rib protector, as indicated in a labeled detail from training photo S69-31159.  Next, a trigger lanyard was released (S69-31160). This put the trigger about halfway down the legs (Pickerell photo 08), which let the astronaut trigger deployment while keeping his helmet and backpack well out of the way of the quite dynamic unfolding (Pickerell photo 09,  S69-31162, Apollo 14 training film clip).  Finally, the cable connecting the antenna to the LM was extended out from the MESA and mated to the antenna. 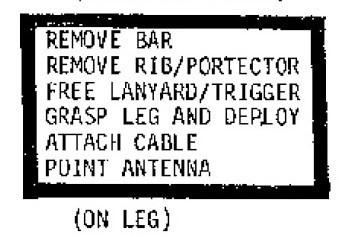 Alignment in both azimuth and elevation (pitch) was done with a flexible-cable crank.  Apollo 13 training photo KSC-70PC-0016 shows Jim Lovell using the crank.  As detailed on page 38 in the Apollo 12 Lunar Surface Operations Plan, a rough alignment was done first while sighting along the antenna mast (Pickerell photo 12): (e) "Rough align antenna in pitch (CCW rotation of the handle pitches the antenna down). (f) Rough align antenna in azimuth. Pull antenna crank out from housing, then rotate handcrank to change antenna azimuth." Final alignment was done with the aid of a sighting 'glass' mounted on the elevation rotation axis (see the figure below, as well as a detail from training photo S69-17211).

The astronauts found that use of the crank in 1/6th-g disturbed the antenna as a whole and threatened to overturn it.  Consequently, one or both of the astonauts had to hold the legs to keep the structure steady.  A final problem was keeping the OPS antennas clear of the wire mesh, particuarly when sighting along the mast or using the sighting glass.  Detailed commentary on the problems encountered during alignment can be found in the Apollo 12 and 14 Lunar Surface journals starting at 116:01:14 and 114:19:27, respectively.

Details of the Apollo 12 and 14 Deployments

* Times inferred from the Apollo 12 transcript are more uncertain than those from the audio-synched Apollo 14 TV record.