Because the Moon has no atmosphere and no clouds, the temperature at a given time and place on the lunar surface can be predicted with accuracy and long in advance.  It depends primarily on the site's latitude and longitude and on the Sun's position in the local sky.  For equatorial sites, temperatures can range from about 104°K (-169°C) just before sunrise to about 390°K (117°C) at  noon.  At high latitudes, shadowing and other factors become important.

The Apollo crews landed when the Sun was low in the eastern sky, a configuration that gave good shadow definition of the landing site terrain.  Solar phase angles (0 degrees at local sunrise, 90 degrees at noon) at landing ranged from 4.7 degrees (Apollo 12) to 14.7 (Apollo 16).  The last three crews stayed for considerably longer than the others and the phase angles at EVA-3 termination were 45.6, 48.6, and 43.1 for Apollo 15, 16, and 17, repectively.

Temperature measurements made with thermocouples positioned within a few centimeters above the surface are available for Apollo 15 and A17. As indicated in the following figures, temperatures at EVA-3 termination for those two missions were about 342°K (69°C) and 325°K (52°C), respectively.  The vertical blue lines indicate the phase angles at EVA-3 termination. 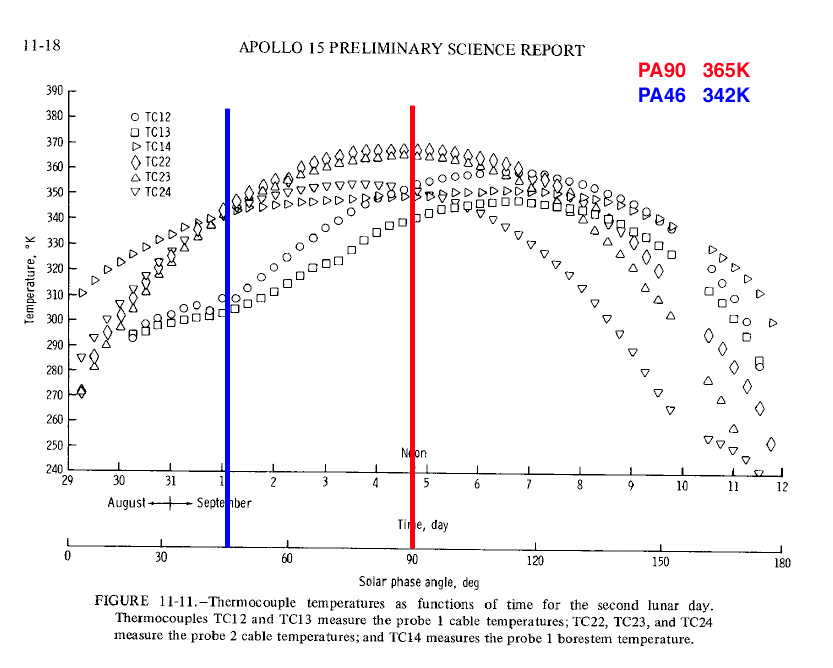 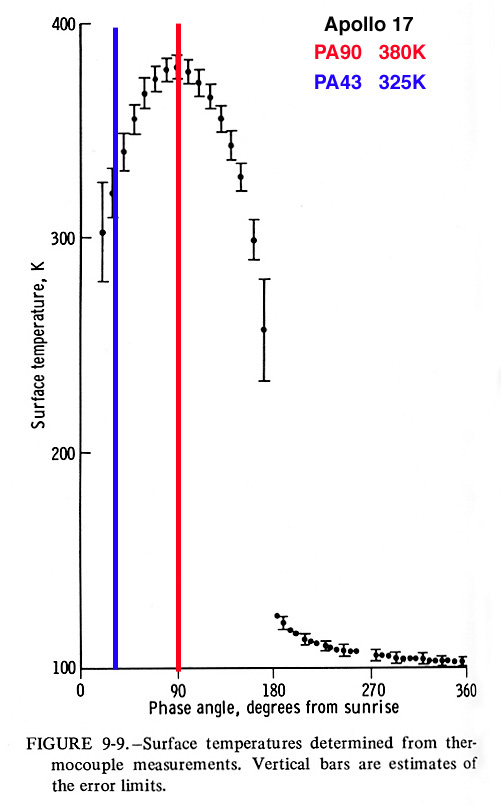 
The Apollo 16 crew landed six hours later than planned and had to defer the first EVA until after a rest period.  Consequently, the solar phase angle - and, presumably, the surface temperature -  at EVA-3 termination was higher than on either Apollo 15 or 17.  Apollo 16 LMP Charlie Duke was the only moonwalker to call attention to a high surface temperature during an EVA.  Not quite two hours into EVA-3, he said,


[Jones - "When you say 'it's hot out here', is there some specific thing you were talking about?"]


Careful thermal design of the suits and other equipment ensured that, with some minor exceptions discussed below, the missions were completed without adverse thermal effects.  In particular, the multi-layer design of the suits ensured that the amount of heat that leaked into the suit from the lunar environment was small compared with the metabolic (body) heat the astronauts generated as they went about their work.  The use rate of cooling water - and oxygen - was determined primarily by the work load: highest when the astronauts were doing physically demanding tasks, lowest when they were riding on the Rover.  Unfortunately, the only water use date available is the total for each EVA; but the astronauts often reported  their cooling settings.  These reports, along with other indicators of metabolic rate, indicate variations in water use rates at various times during the EVAs.  In the case of Apollo 16 EVA-3, despite the high sun angle and Charlie's use of Intermediate cooling for about 3 hours 33 minutes of the 5 hour 40 minute EVA, his total water use for the EVA wasn't particularly high.


Oxygen and feed water use during EVAs 1 and 2 on Apollos 16 and 17 are presented in the following table.  The EVAs are listed in order of increasing solar phase angle  The first EVAs are not included because they were dominated by labor-intensive ALSEP deployments. None of the Apollo 15 EVAs are not included because of the extra work done on drilling tasks during all three EVAs.  As long as the astronauts had their cooling controls set so that they were comfortable, oxygen use is a measure of metabolic rates.  Water use is a measure of the heat - both metabolic and solar - which had to be dealt with by the cooling system.  The ratio of water use to oxygen use is a possible measure of the relative importance of the solar heat load on the cooling system.  Apollo 16 EVA-3 doesn't not appear have exceptional ratios.

4.  Temperature Measurements Made on the Lunar Surface

Critical piece of equipment such as the TV camera, the Lunar Communications Relay Unit (LCRU), and the batteries had radiator mirrors and/or thermal coverings.  The crews dusted the mirrors regularly and opened or closed covers as requested by Houston.  Further discussion will be presented in WOTM Chapter 3.2.6.

Objects that sat out in the Sun for long periods of time could get warm or even hot to the touch.  Examples include the Hand Tool Carrier that Al Bean lugged around on Apollo 12 EVA-2; the Apollo 15 EVA-2 rockbox that was in full Sun for most of the EVA; and the Apollo 16 Cosmic Ray Experiment, which was purposefully positioned facing the Sun early in EVA-1 and wasn't retrieved until late in EVA-3.

There were a few equipment problems due to solar heating.  Only one was of consequence: failure of the Apollo 17 Surface Electrical Properties experiment.  There is one instance of a piece of equipment, the Apollo 16 UV Astronomy Camera, which had a minor, cold-related problem.

Temperatures measured at depths greater than about 80 cm as part of the Heat Flow Experiment show no day/night variations, because of the low thermal conductivity of the soil.  Temperatures measured a 100 cm depth were about 252°K (-21 °C) at the Apollo 15 site and 255°K (-18 °C) at the Apollo 17 site.   As mentioned by the authors of the Lunar Sourcebook, "a lunar habitation buried beneath a thick regolith radiation shield will not be subjected to (day/night) temperature extremes but rather will have to find an efficient method for  dissipating its waste heat."